Sweating 101: Get the Facts 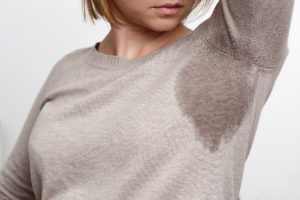 Let’s face it: Everybody sweats. Whether you’re outside enjoying a hot summer day or you’re nervously giving a presentation, sweating is just a part of life, even if you do end up with some body odor as a result.

But, why does the body sweat, and when is it too much sweating? Let’s take a look at some of the facts surrounding physical phenomenon.

Why do I sweat?

Sweating serves two functions within the body: as a reaction to stressors and to regulate body temperature (known as thermoregulation). It is the work of the autonomic nervous system (ANS), which is in charge of the unconscious actions of the body, such as breathing. The ANS is broken down into three subsystems, each with its own function:

In short, you can thank your sympathetic nervous system for the unfortunate—but necessary—act of sweating.

What some of the different sweat triggers?

Aside from the aforementioned heat and stress triggers, other sweat triggers can include:

Along with these triggers, other factors can come into play when it comes to how much you sweat. For example, larger individuals usually sweat more because their body has to work harder to cool itself down. Genetics may also cause some people to sweat more than others.

It’s important to note that the most obvious sign that you may have an issue with sweating is when nothing really triggers your body to sweat at all.

When is it too much sweat?

As stated, sweating is something that everybody does and for most of the same reasons. That said, if you find that you’re sweating more than the average person even when you’re doing nothing at all, you may be living with hyperhidrosis. This is a relatively common condition among many in the U.S. and is the result of overactive nerves triggering the body to sweat profusely, even when it doesn’t need to. It can affect the hands (palmar) and feet (plantar), the underarms (axillary) and even the face, head and neck area.

How to Stop Sweating

Hyperhidrosis can wreak havoc on your wardrobe, personal effects and relationships, depending on where the sweating is occurring. Thankfully, there are a number of options for effectively managing the issue, including topical medications and strong antiperspirants. If you find that your underarms have done a number on a few of your favorite shirts, you may even want to consider miraDry® to reduce your underarm sweating.

miraDry is an FDA-cleared treatment to battle underarm sweating and body odor. It uses innovative technology to effectively destroy the sweat glands (don’t worry, you have plenty of sweat glands to spare) and even reduces hair growth. The best part? Only one treatment is typically needed to keep your underarms dry forever and the results are immediate and permanent.

If you’re ready to say goodbye to sweaty hands, feet and underarms, contact us today. Our specialists are waiting to help get your sweating under control once and for all.