Hands Up: How ETS Changed My Life 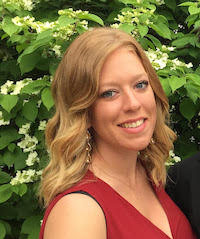 “Of course, every young girl thinks about her wedding day…all I could think of was my hands dripping onto the floor and a ring not sliding onto my swollen finger. That’s not the image you want for the ‘happiest day of your life’.”

Embarrassed and resigned, these were the monopolizing thoughts at the forefront of Lindsay Kasper’s mind growing up with severe hyperhidrosis.

The now 23-year-old accountant from Wharton, New Jersey lived with palmar and plantar hyperhidrosis from the time she was young. Like other children, Lindsay had to work through the everyday challenges growing up presents. Unlike other children, she had to do so while simultaneously combatting the effects of excessive sweating. Ordinary childhood activities such as video gaming and sports weren’t fun; they were stressful and anxiety-ridden as she struggled with the effects of her condition. “Taking tests at school was a big issue. There would be puddles on the paper and on my pencil. The more it happened, the more nervous I would get. It was just an endless cycle.”

Though she had hoped to grow out of the condition as she grew up, it only continued to hinder her and her self-confidence. “Driving in the summer became difficult. There would be sweat all over the steering wheel, my fingers would swell and it would just be uncomfortable,” Lindsay stated. “Similarly at work, when writing or typing, I would have to stop and wipe off so nobody saw. It definitely worsened when I knew someone was around me watching.”

Lindsay tried several treatment options, such as prescription antiperspirants, to combat her condition – all with no success. She even considered Botox® injections and explored surgery, only to be told it wouldn’t be possible. “I saw a doctor when I was about 13 and she told me that this surgery would never be covered by insurance because it was seen more as cosmetic than necessary. It was then that I gave up the dream of ever having the surgery.”

Fast forward to 2015 when Lindsay decided she had had enough. After hours of research, she came across the Hyperhidrosis Center at Thoracic Group and immediately called for a consultation for endoscopic thoracic sympathectomy (ETS).

Her experience was immeasurable. “Everyone was amazing and made me feel comfortable. My surgery was booked at my consultation for that very next week. I was surprised that it happened so quickly, but I never felt rushed. I felt really taken care of and understood by Dr. Caccavale’s entire practice.”

ETS is a minimally invasive procedure where the sympathetic nerve chain is divided to reduce the amount of nerve stimulation that causes sweating. Through a small incision, surgeons are able to insert a video camera attached to a thoroscope to view the surgical site. Then, one additional small incision is made for the instrument needed to perform the procedure. As a result of its less-invasive nature, patients go home shortly after the procedure with minimal recovery time.

For Lindsay, the results were immediate. “I woke up from the surgery to my mom holding my hand, amazed that it had worked instantaneously…I am incredibly happy with the results for my feet as well.” Just hours after having the ETS performed, Lindsay was able to recover quietly at home. As an additional relief—and with help from the practice—Lindsay was able to have insurance cover the cost of her procedure.

Lindsay couldn’t be more pleased with the results of her procedure. She is living life to the fullest in ways she was never able to before, like having a manicure, accessorizing with rings and wearing heels without having to stuff the soles with paper towels. “My confidence is finally back. I never remember a time that I didn’t have sweaty hands, so now it is honestly a whole new world for me. Having such an unattractive condition completely gone makes me feel so much better.

I would recommend Dr. Caccavale and his practice to anyone with this condition (even if they had to travel 1,000 miles to see him). I could not have had a better experience and I feel so lucky to have met him. He has completely changed my life.”

As for her wedding day, she now envisions it (and every other major life event) sweat free.