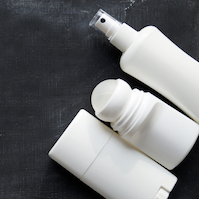 The human body has two to five million sweat glands. That’s a lot of sweating each day—severalliters, in fact. It’s no wonder that science worked tirelessly to develop antiperspirants that combat the pesky problem of underarm sweating.

But, while you’re liberally applying waterlily- or powder-scented deodorizers to your underarms, do you know what you’re actually putting on your skin?

Let’s take a look at some of the more common ingredients in antiperspirants that may raise your eyebrows:

This is a pretty big buzzword in the world of beauty, health and personal care products. Parabens were developed in the 1950s and are used as a preservative in a bunch of things (e.g., toothpaste, shampoo, makeup, etc.) to keep bacteria from developing. If your antiperspirant contains any of the following, it has parabens:

Parabens have been getting a lot of backlash lately. There is concern among public health advocates that the exposure to them over time may be contributing to a whole host of health conditions. That’s because parabens have been known to disrupt the inner workings of hormones in the body—a phenomenon that has been linked to breast cancer (among other things). Parabens can also mimic the natural hormone estrogen.

Sulfates are also a popular product in the “no-no” department. They are used in almost as many items as parabens, as foaming and cleansing agents. The issue with sulfates is their ability to break down proteins, which can cause cell membranes to degenerate. They have also been shown to leave residue in the brain, heart and lungs.

Aluminum compounds are a key ingredient in antiperspirants because they are able to plug sweat ducts and temporarily keep moisture from escaping. However, the constant application of this heavy metal is a growing concern as it can be absorbed through the pores of the skin (or even a cut). This long-term exposure has been rumored to be linked to an increased risk of breast cancer and Alzheimer’s disease. It has also been suggested that these compounds work as hormone disruptors like their paraben counterparts.

Propylene glycol is a chemical that keeps substances from drying out (humectant) and was originally developed as an antifreeze product. Unfortunately, propylene glycol is categorized as a neurotoxin that has been known to cause kidney and liver damage as well as dermatitis.

Time to Try an Antiperspirant Alternative

With all the risk associated with these any other ingredients found in antiperspirants, finding an alternative may be the safest course of action.

miraDry is an FDA-cleared treatment for reducing excessive underarm sweat, including excessive sweating caused by hyperhidrosis. It uses electromagnetic energy to neutralize the sweat and odor glands that exist beneath the surface of the skin. It has also been effective in removing hair from the underarm area, leaving you with one less thing to worry about when it comes to your beauty routine.*

Tell antiperspirants you’ll smell ‘em later. For information or to schedule an appointment with a miraDry specialist, contact the Hyperhidrosis Center at Thoracic Group today!